The above tram is a Siemens ULF, manufactured almost exclusively for Vienna, Austria (ULF is for ultra-low floor).  Most trams built today are low-floor models.  Vienna’s tram is even lower, achieved by having no wheel to wheel axles.

Floor height is important when looking to facilitate the easiest loading/unloading for passengers while at the same time avoiding extensive infrastructure modifications.

The Siemens ULF tram affords the least such modifications to infrastructure, but it also has more operational and maintenance drawbacks than the standard low-floor tram.  The costs/benefits of each model will have to be weighed in the light of Savannah’s particular needs.

For sure, either a ULF or low-floor tram will be implemented here, and thus the rest of this proposal will conservatively presume a 14″ floor above top of rail for the purposes of examining requirements and costs of the system.

Width of vehicle is also a major choice when planning a new system.  Most tram systems today use vehicle widths of between 7.5-9.0 ft.  The ETC tram is suggested to be between 8.0-8.5 ft.; most city buses fall between 8 and 9 feet in width.  A narrower profile is preferred as long as sufficient spaciousness is achieved in the interior.

The removal of one seat width wise also affords more aisle space both for movement within the vehicle and for standing room on crowded vehicles. 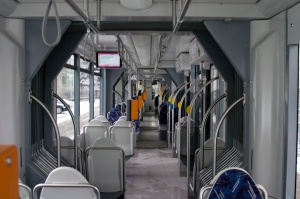 The additional aisle space allows for bringing on board baby strollers, or personal carts carrying groceries or other packages.

There is much to be decided on in the look and configuration of the interior besides just the number of seats across a row.  The variations in styling, materials, colors, accessories and other option are numerous, enough to create a separate page on the subject, if not a whole other website.

Tram cars are typically 66 feet in length.  They are made so that they can run in multiple car sets for heavy use lines, or at peak use periods.

There are currently no major U.S. owned makers of trams.   United Streetcar of Portland started up specifically to provide that city with a vehicle to run in the traditional mode as the American streetcar once did. 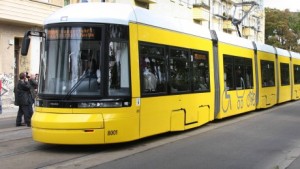 The major foreign owned companies, who have been doing this now for many decades, have established some facilities in the U.S. to produce for the American market.  Most of their production so far has been to provide LRV’s for the many hybrid systems that have come about in the last 30 years.